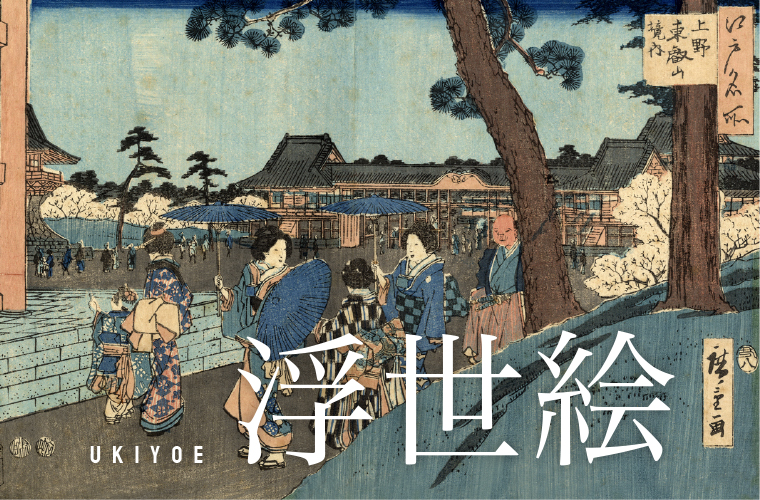 One of the genres of painting that began around 1550 in the Edo period in Japan. It appeared as a picture depicting Ukiyo, that is, a genre painting.

In short, it describes;

・The tough and fragile life of common people

It features bold composition, strong lines and shadow-less expression, etc. The Ukiyo-e shows us the everyday life and the culture of commoners of the Edo period.

Ukiyo-e in the early stages was mainly original drawings and single-color woodblock prints.

In the middle stages (around 1765-1806) multicolor woodblock prints were developed. At the same time the work divided into groups of Shitaeshi (Ukiyo-e painters), Horishi (carvers) and Surishi (printers). This division of labor established the mass prodcution system and brought its golden age. Furthermore, the portraits of beautiful women, Kabuki actors and famous scenerise were also released and Ukiyo-e became a great popular culture in Japan.

At the late stages (around 1807-1858) world famose Katsushika Hokusai, Utagawa Hiroshige, and Utagawa Kuniyoshi appeared and created the big trend of Ukiyo-e.

After the rapid social changes called Civilization and Enlightenment of Japan and The Meiji Restoration happened in Japan, Ukiyo-e played an important role of a medium with a very broad appeal to the masses.

The new art movement called "Japonisme" flourished in Europe mainly in France in the 19th Century. The movement affected several different fields of arts witch especially had a great influence on Impression for such as Vincent van Gogh and Claude Monet. It is widely known that "La Mer" composed by Claude Debussy and "Big Wave" sculptured by Camille Claudel were inspired by Hokusai's famose paint called "Kanagawa Oki".

OEM products also available. Please feel free to contact us if you have any requests or questions on the products.