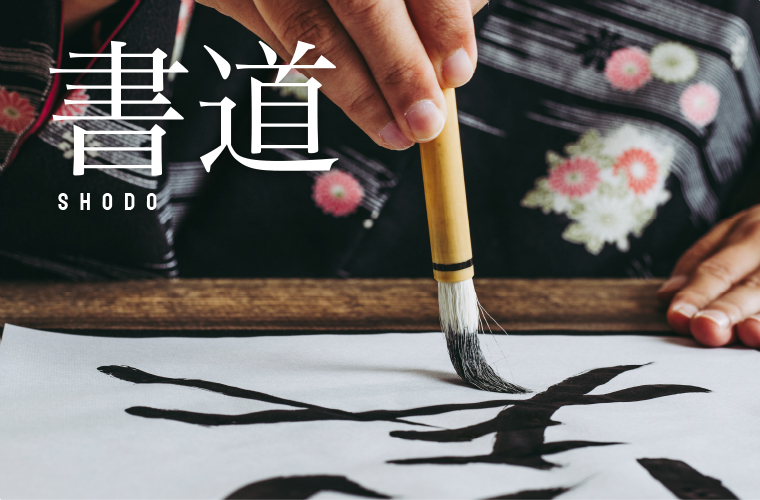 SHODO is a kind of Japanese traditional art and also the way of writing Chinese characters (KANJI) and Japanese characters (HIRAGANA). SHODO needs special writing tools; brushes (FUDE), ink or an ink stick (SUMI), an ink well (SUZURI), special Japanese paper (HANSHI), a felt mat for the paper and a paper weight (BUNCHIN). These tools have been used for writing since the 5th century.

First people need to rub an ink stick (SUMI) on an ink well (SUZURI) and concentrate on writing on the paper. They need to focus on the color tone and shading of the ink, also how they handle and move a brush (FUDE) in the creation. Great calligraphy impresses people by its beauty as well as it can express the creator’s character and emotion.

Calligraphy came from China around Tang Dynasty (618-907) and Japanese calligraphy was affected by many great Chinese calligraphers such as Wáng Xīzhī (王羲之). In those days, the high skill of SHODO was essential for those in upper class including Samurai.

Nowadays, most of students in Japan learn how to write calligraphy and SHODO is a typical homework during a long holiday and eventually displayed on the wall of the class at school. Some people use a brush (FUDE) to write the seasons’ greeting card and some write their name in the list by FUDE at formal occasions such as wedding parties or funerals. SHODO is not just an art but is an important skill to communicate with people in their daily lives.

KAKIZOME, calligraphy for the first time in the year, is a Japanese traditional writing ceremony held on the 2nd of January. People usually write down their New Year’s resolutions.

There is a traditional fire event called DONDOYAKI or SAGICHOU on the 15th of January at shrines and temples. It means the end of the new year and is believed the new year spirits go home with the smoke and the fire. People burn the New year’s decorations together with the paper they wrote at KAKIZOME, hoping to improve the writing skills and to make their wishes.

SHODO has taken a part in a traditional part of Japanese culture for many years.