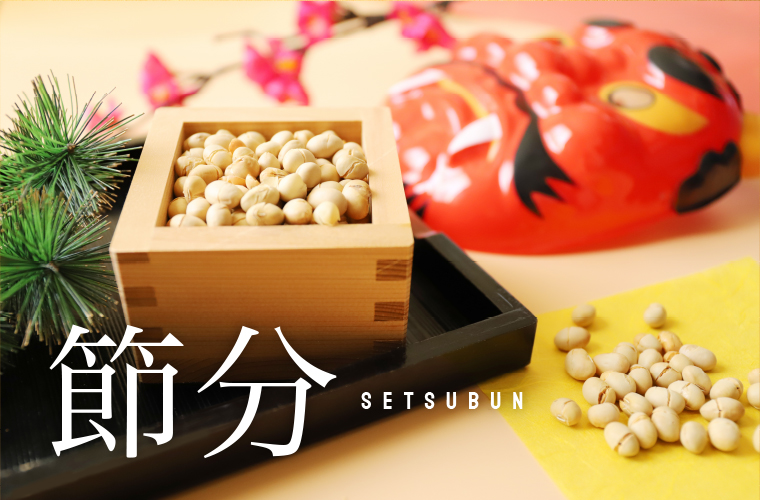 The 3rd of February is called SETSUBUN, a day to celebrate the coming Spring, a day to pray for your happiness and good health.

Literally SETSUBUN means division of the seasons and a day before the beginning of each season. Therefore, Japan has four days of SETSUBUN in a year. Japan used to begin a year from the first day of Spring called RITSYUN. A day before RITSYUN, that is, SETSUBUN was a New Year’s Eve. Therefore, this 3rd of February SETSUBUN is most important and remained as SETSUBUN for now.

It was said that demons which means ONI in Japanese came at SETSUBUN and brought bad luck to people. There are some traditional events for SETSUBUN to avoid the invisible evil power. MAMEMAKI (throwing roasted soy beans) is the most common at home and temples. It started in the HEIAN period around the 8th century. People throw away the beans in and out of the house and shout two times “ONI WA SO TO! FUKU WA UCHI!” which means “Demons out! Good fortune in!”. There are several theories about the origin of this event and some say that MA means evil and ME means destroy, so people throw beans (MAME) to drive away evil demons (ONI). Afterwards people pick up the beans and eat the same number of beans as your age to wish your good health for the year.

Each region has their unique events for this SETSUBUN. Some regions say “Both demons and good fortune in!”, some throw peanuts instead of roasted soy beans, some eat the same number of beans as your age plus one, some hang sardine heads and holly branches at the entrance of the house to avoid demons. Recently a sushi roll called EHOUMAKI is popular to eat at a day of SETSUBUN but this custom has started in the Western part of Japan by some stores to sell their food and eventually spread around. It is a commercial even like a St. Valentine’s day. If you visit Japan around this season, you can find many kinds of EHOUMAKI at convenience stores, supermarkets, everywhere in Japan.