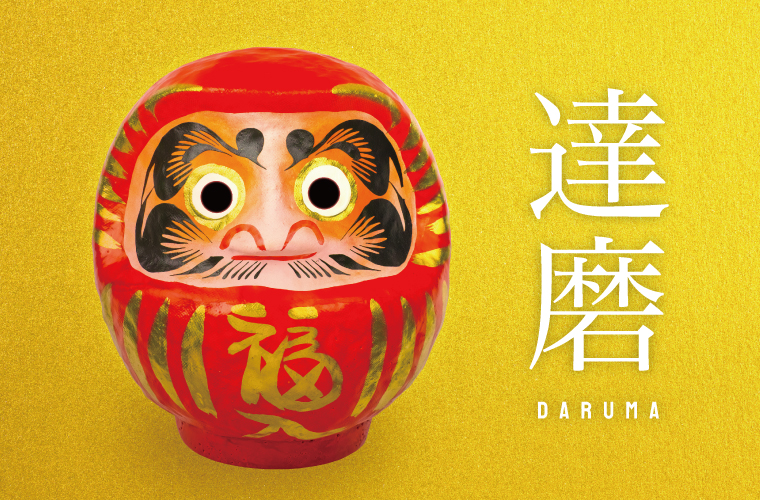 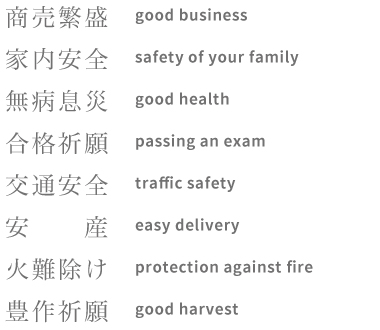 DARUMA is modeled after a Buddhist monk and a founder of Zen Buddhism called Bodhidharma who lived during the 5th or 6th century. He was born in India and moved to China to spread the Zen Sect.

The legend said that Bodhidharma had a very strong faith in his religion. He lost his limbs  while he mediated deeply and kept sitting in a correct posture to enter a spiritual state of nothingness for nine years.

In the Edo period around 17th to 19th century, the story about Bodhidharma was introduced in Japan and combined with a traditional Japanese talisman called OKIAGARI KOBOSHI which they newly produced the current DARUMA doll.

OKIAGARI KOBOSHI is a roly poly toy that always comes back to an upright position when pushed and knocked over. It literally means “If you get knocked down seven times, you will get up eight times anyhow.” and also means that “A man’s walking is a succession of falls.”

There are some color variations of DARUMA,  the most popular color  red. It is said that Bodhidharma worn a red colored special cloth. Also, the color red represents the sun, fire, blood and life. People believed that red color has a power to protect them from bad luck and disease, that is the reason why the color is used for some sacred sites and buildings in Japan such as TORII gate (a gateway of a shrine).

The fatal disease of small pox was spreading like a plague in the Edo period. Smallpox was called HOSO at that time and people believed the disease was brought by the God of HOSO. It was said that the God with evil spirits hates the red color, therefore people used to put red clothes on the patients and paint the toys in red to protect their children. Daruma in red was one of the popular charms for those suffered from HOSO. 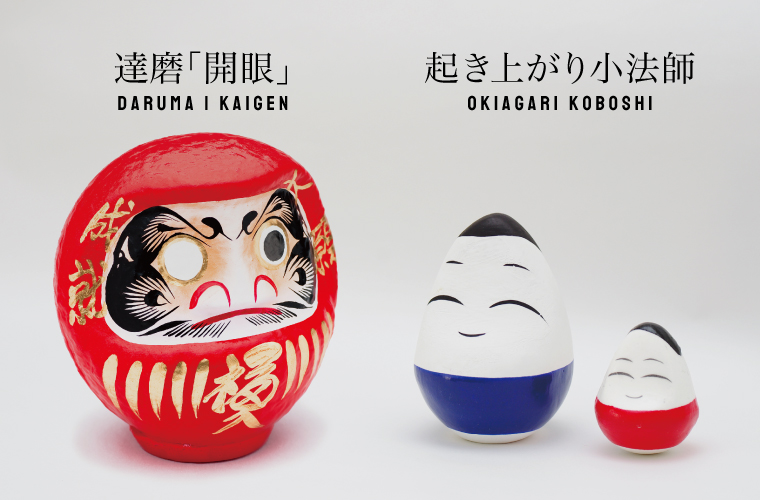 How to make a wish on DARUMA

DARUMA does not have black eyes painted on the face. They are intentionally left blank, so that the person who owns it can draw them in. First the owner puts in its right eye which we call KAIGEN, means literally Opening-Eye, and makes a wish. Secondly the person needs to work for it. When the dream is achieved, the other eye is painted with gratitude.

Time went by, DARUMA became to be a typical talisman to make your dreams come true. You might have seen on television that politicians were drawing an eye after they was elected.

Traditionally it is said that the power of DARUMA lasts for one year only. If your wish did not come true within one year, you would need to take the DARUMA to shrines or temples for a burning ceremony.

Most common color red represents good luck and good fortune. There are other colors such as Yellow, Purple, Gold, White, Blue, Black and each color has its own meanings depending on the place you purchase. Therefore, find the one to meet your wishes when you get it.

Would you like to try and draw eyes for your wish??