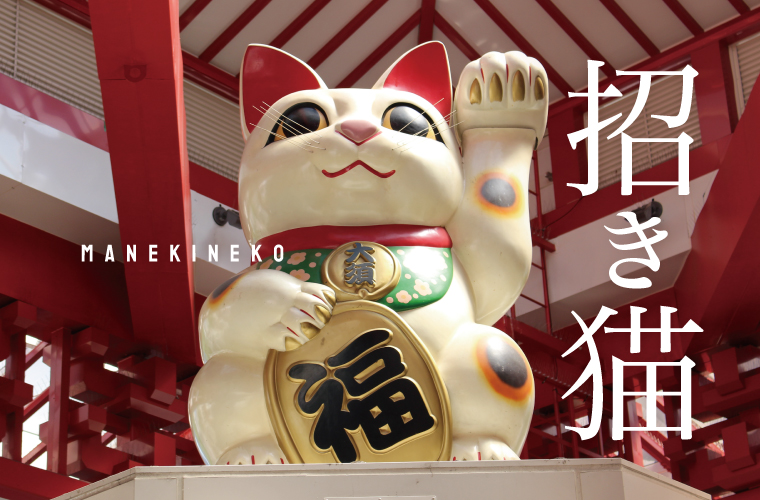 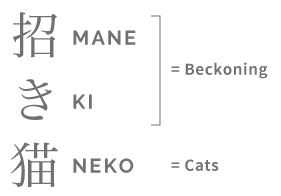 As you can see on the internet, it is a global fact that cats are beloved icons all over the world without any exception. People just love cats, no matter what, cats are one of the most adorable creatures in this world. Hope you all agree with it.

Since ancient times, cats are preferable animals as they get rid of mice. Here in Japan, there is a special cat called “MANEKI NEKO” in a waving pose. This special cat is called Happy Cats, Good Luck Cats, or Beckoning Cats. It is believed that MANEKI NEKO raising the right paw brings money and the left paw people (customers). Some say both paws raising brings both money and people, but some say it is too greedy. These cats are widely known as a lucky charm in Japan.

Many old legends in Japan came from other countries such as China, India, but MANEKI NEKO is said the story was originally from Japan, especially from the place use to be called EDO (the place currently called Tokyo), though some insist it was from Kyoto.

There are many myths on MANEKI NEKO. The most popular is the story of GOTOKU temple. In the Edo period around the 17th century, a poor monk lived in a temple with a cat. He took great care of the cat and shared his meals with the cat. One day Lord II NAOTAKA took shelter from rain under a big tree near the temple. The cat of the temple suddenly beckoned to him with its paw. Right after he came close to the cat, a lightning struck the tree and he was saved his life by the cat. He was so delightful, made a great donation for the temple. After that, the temple became prospered. When the cat was dead, a statue of MANEKI NEKO was made to commemorate this miracle lucky cat. GOUTOKU temple is also called Lucky Cat temple. It is located at GOTOKUJI station in Setagaya, Tokyo.

Another popular story is origin from ASAKUSA shrine. Again, in the Edo period, an old lady had to let go of her loved cat. One day the cat appeared in her dream and said if you made a figurine of her car, fortune would come. The lady made a ceramic cat figurine and sold at ASAKUSA shrine in Tokyo. The cat figurine became popular, sold very well, and brought her fortune. ASAKUSA shrine is also known as SANJASAMA among the local people and the festival (SANJA festival) is one of the three major Tokyo festivals. ASAKUSA shrine is located just next to SENSOU temple, one of the most famous temples in Tokyo, and both are located at ASAKUSA, an undoubtedly well-known sightseeing spot in Tokyo.

Back to the Edo period in the 17th century, people used cats drawn on paper as a lucky charm and put it at the entrance of their stores wishing more customers come and praying for good business.

The style of MANEKI NEKO has changed with the time. They usually stand on their two hind feet, raise their forefoot or forefeet, and feature a collar with a bell sometimes written FUKU (Fortune). You might see some holding a KOBAN (Japanese old coin) in their paws. The coin is written a unit of Japanese old money used in the Edo period such as 1,000 RYO, 10,000 RYO, etc. RYO is considered as a quite fortune. Traditionally the colors used for MANEKI NEKO are white, black, and red. Nowadays, there are more color variations based on your wish.

The 29th of September is Lucky Cat Day established in 1995 by Association for MANEKINEKO Japan. It is a day to be thankful to MANEKI NEKO. It is also called KURU FUKU NO HI in Japanese, means “Fortune Coming Day”. 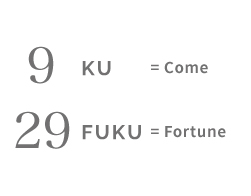 In September, there are some festivals related MANEKI NEKO at AICHI and MIE prefectures where are famous for its production.

MANEKI NEKO is one the popular icons representing traditional Japan. It is interesting to visit those MANEKI NEKO related sites when you come to Japan.