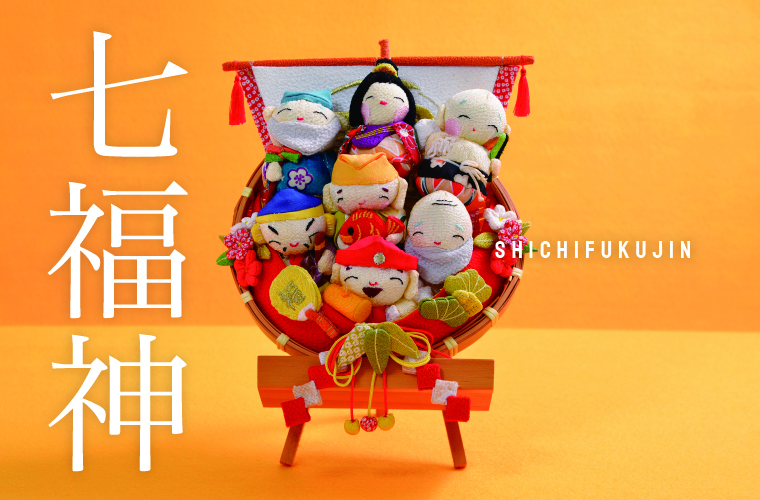 There are popular Seven Gods in Japan. They are a highly popular group of deities called “ShichiFukuJin” in Japanese and known as “Seven Lucky Gods”. They came from myths and local beliefs that originated in ancient gods from old China, old India, and Japan. The number of 7 is a favorite number for the Japanese and the concept of the group of Seven Gods was settle down in the 15th century in Kyoto, though the original member was unclear. They travel together on their treasure ship known as “TakaraBune” and bring us good fortune. In the 18th century, the Seven Lucky Gods Pilgrimage during the New Year (Jan.1 to Jan.7) to wish good luck and sleeping with the drawing of the Seven Gods under the pillow on the night of January 1st became very popular. It is said that the current seven members were standardized around the 18th century. 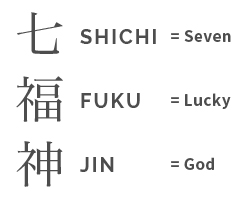 It is believed the Seven Gods bring you good luck and each deity has its special fortune to make people happy. 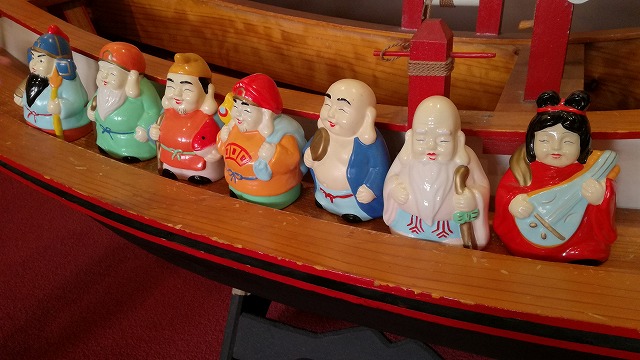 Daikoku Ten 大黒天 = Daikoku God
The God of agriculture, farmers, rich harvest, commerce, and trade. He has a happy-looking face, wears a Zukin (a big hat) and carries a treasure sack over his shoulder, holds a magic mallet, stands on bales of rice.

Ebisu Ten 恵比寿天= Ebisu God
The only God purely originated from Japan, the God of the ocean, fishing, good business. He holds a large red sea bream in his left hand and a fishing rod on the right and wears a tall hat. After the worship was spread to merchants and farmers, Ebisu has become a god of success in business. Some might know a station called Ebis on JR Yamanote Line in Tokyo. One of the largest beverage companies of Japan “Sapporo Holdings” used to have a brewery in this Ebis area and established its popular beer “Yebis” in the late 19th century. As shipments increased, they built a station only for transporting the Yebis beer, afterward opened for passenger service and named it Ebis station. A statue of Ebis God is placed outside of the west gate of the station and there is a Ebis shrine nearby. 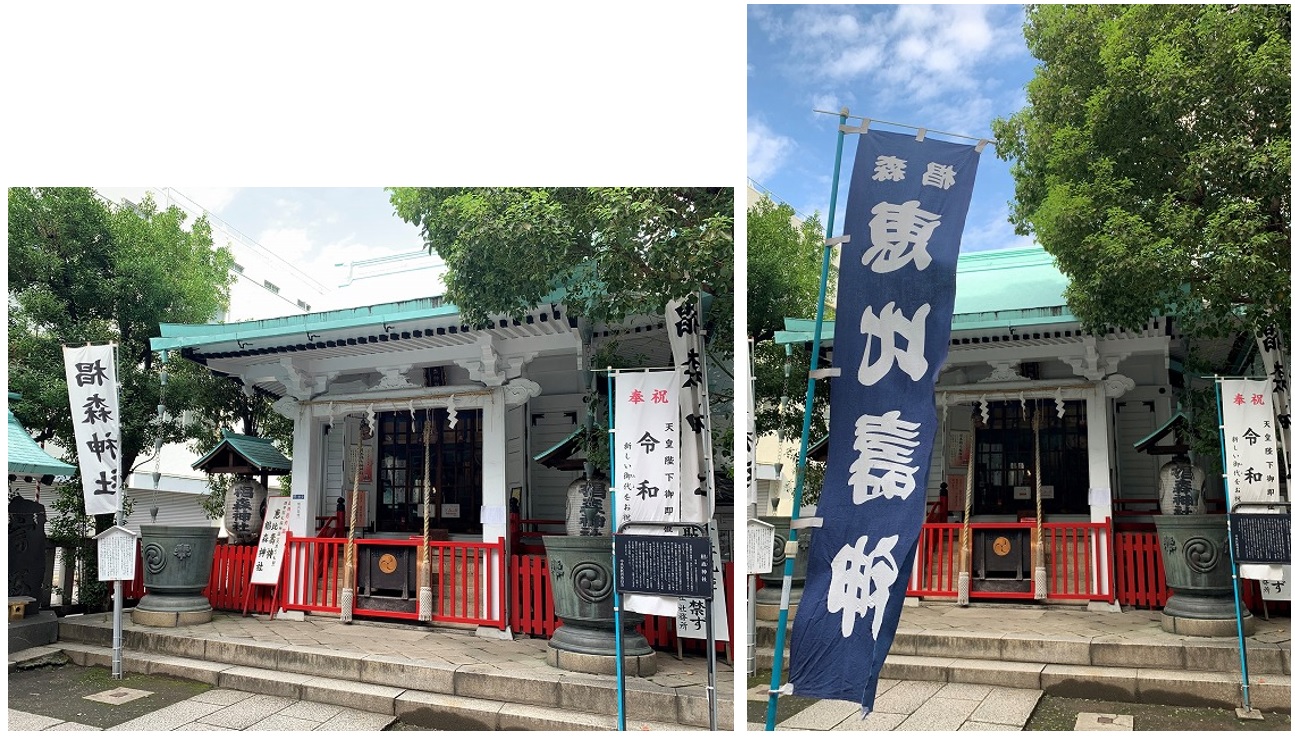 The Goddess of knowledge, art, music, language, letters, river, water, and marriage. She plays a Biwa (a traditional Japanese lute) and often stays in the lotus. 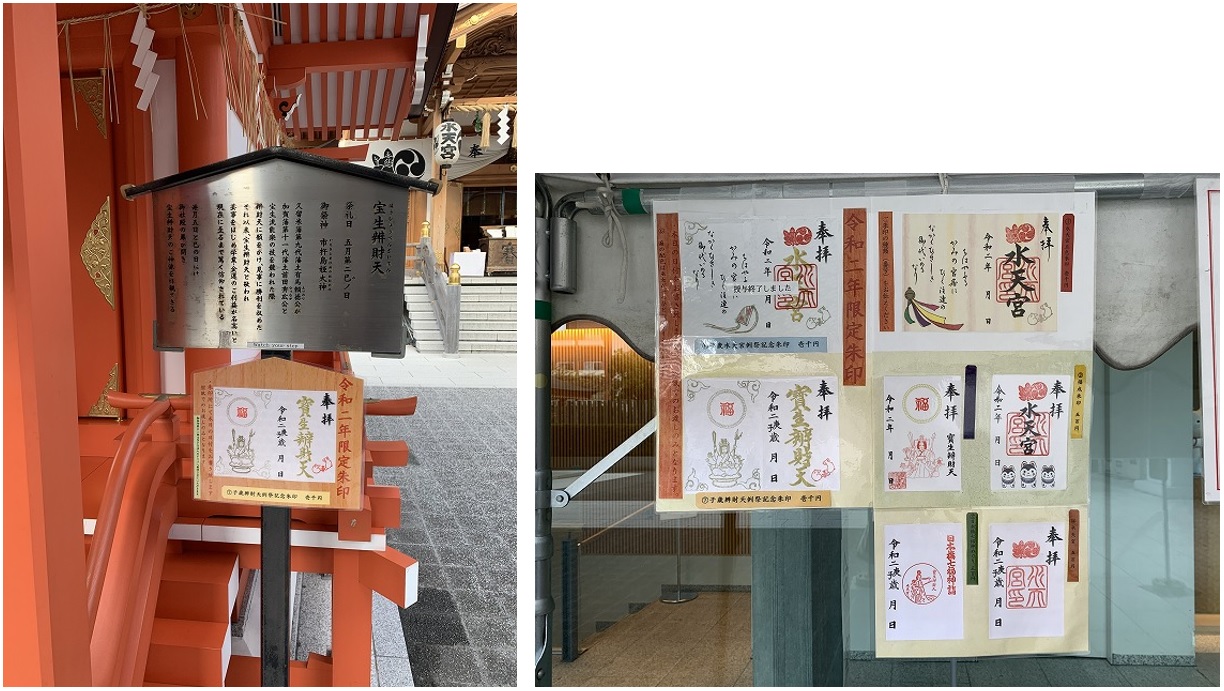 Bisyamon Ten 毘沙門天 = Bisyamon God
The God of victory, defense, guardian, business, treasure, and health. He dresses in armor and holds a weapon in one hand and a treasure pagoda in another. 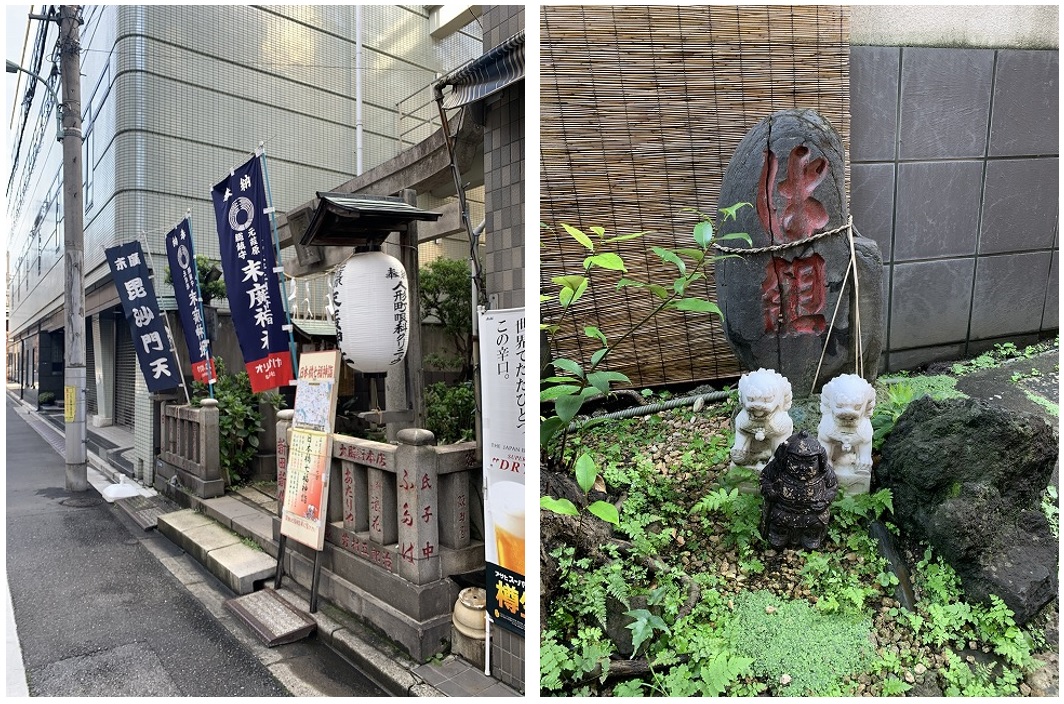 Hotei Son 布袋尊  = Hotei God
The God of happiness, abundance, good health, and family. He has a cheerful face with a big belly, carries a big cloth sack filled with treasure on his back, and holds a fan in his hands.

Jurouzin 寿老人 = Jurouzin God
The God of longevity, wisdom, and happiness. He has a long white beard, wears a unique hat, holds a long wooden cane in one hand and often a peach or a handscroll in another, and accompanies by a stag. 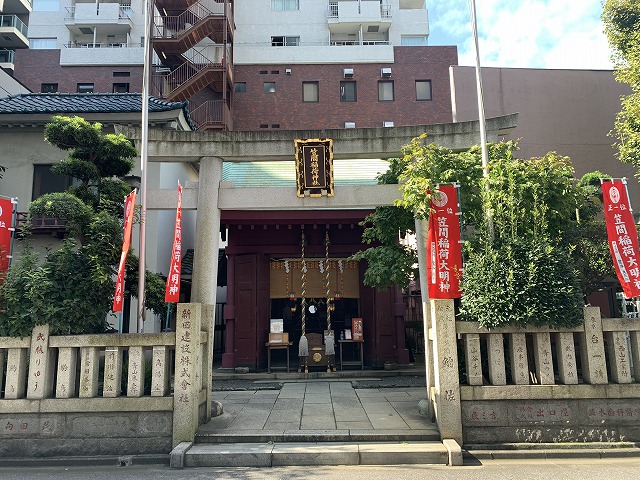 The God of longevity, wealth, and happiness. He looks similar to Jurouzin, but Fukurokuju has a bald with an elongated forehead and holds a long wooden cane tied with a handscroll in one hand and accompanies by a crane and a turtle. 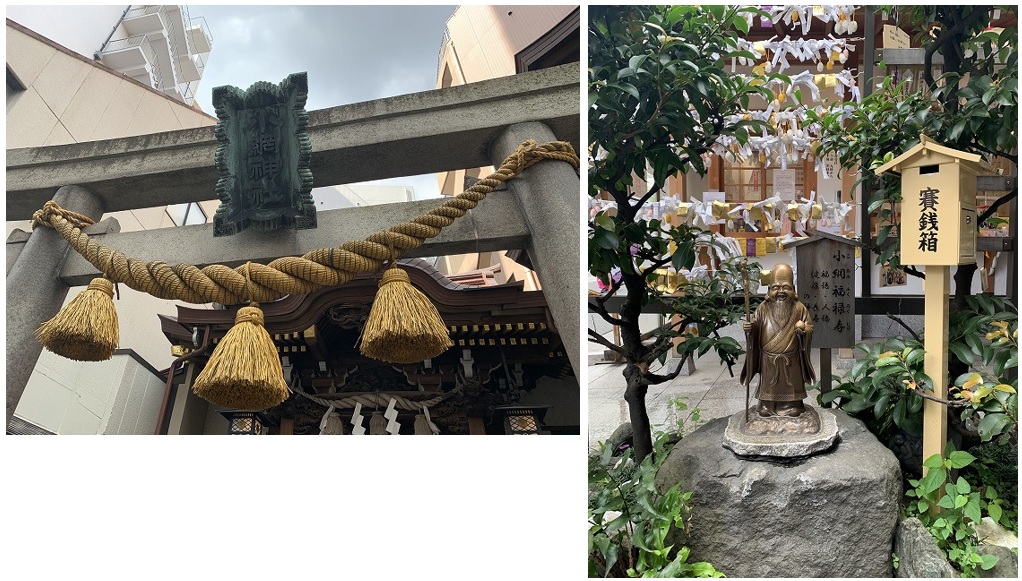 ShichiFukuJin Meguri is one of the most popular customs during the New Year. It is to visit the seven gods at shrines or temples and collect stamps on the special notebook called GoshuinCho. Major cities in Japan have some ShichiFukuJin walking courses, for example, Tokyo has more than 20 routes. Yanaka route is the oldest and Nihonbashi is the shortest. Many shrines and temples only offer the memorial Seven Gods' stamps during the New Year, but anybody can visit those shrines and temples anytime. 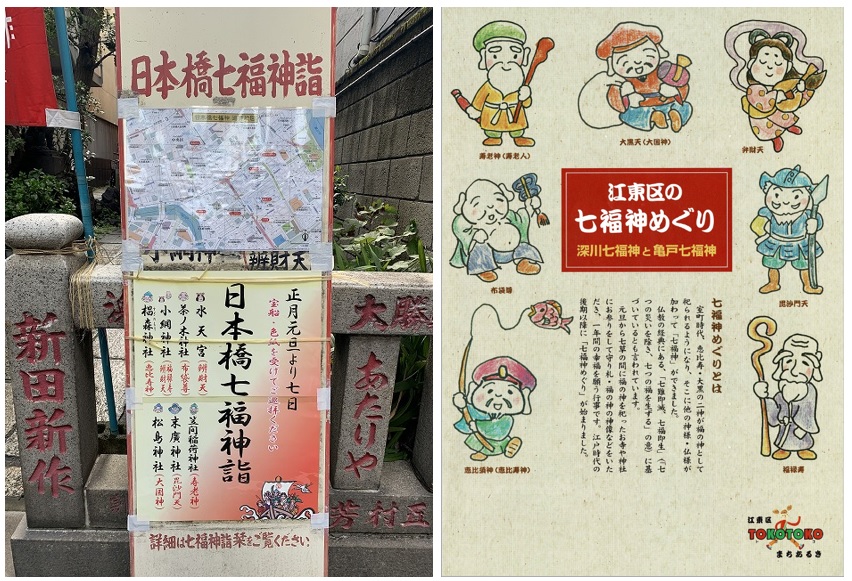 Here is the map of the walking route used for Nihonbashi ShichiFukuJin Meguri this time. Starting from Suitengumae station (Z10) of Hanzomon line or Ningyocho station (H14) of Hibiya line or Ningyocho line (A14) of Asakusa line, around one to two hours' walk from ① to ⑦, except for the New Year's period. 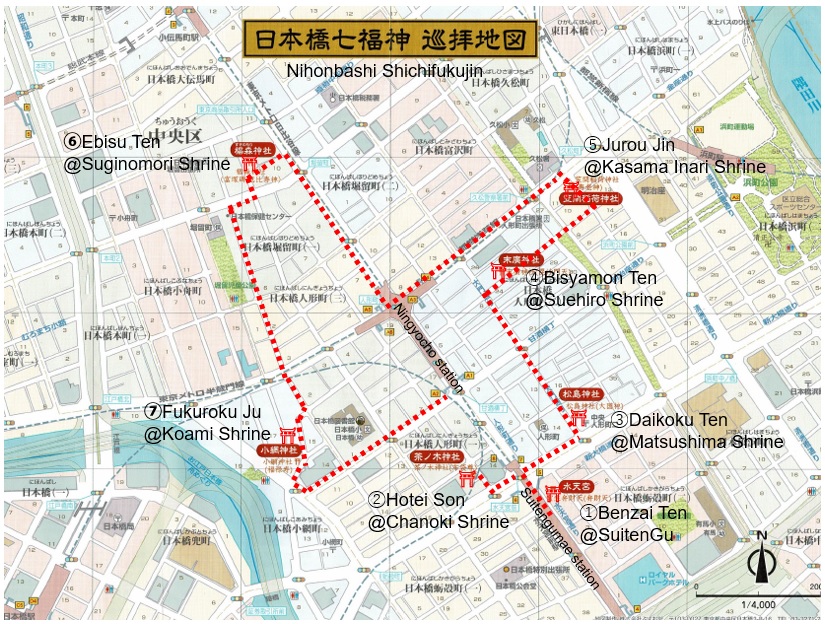