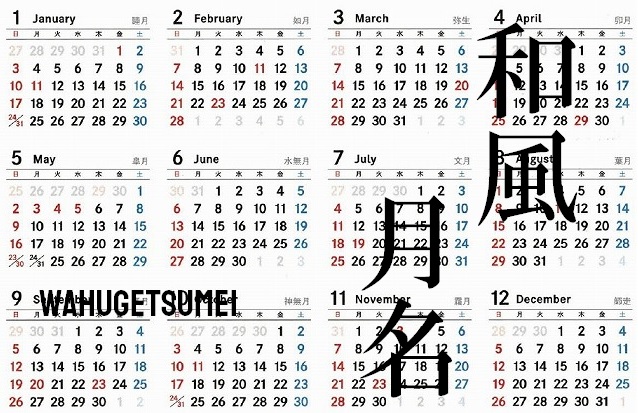 Have you heard of WahuGetsuMei?

The old calendar starts around three to seven weeks later than the new calendar, so the names of WahuGetsuMei do not match the current season. It might be easier to understand the words are about one month behind the recent seasons. For example, the name below 弥生(Yayoi) March shows April at present.

There are many things uncertain about WahuGetsuMei, the history behind, when it started, where it came from and how these twelve names remained. It is said that people have been using the current style since the 17th century. Each name has its own origin with various different stories and we will introduce the most common ones as below.

First of all, it might be useful to know how we call a month in Japanese.

A month of harmony, family and people gather around to celebrate the New Year.

A month you need to wear many layers as it is cold.

A month of seeds sprouting and flowers blooming, the beginning of spring.

A month of Deutzias blooming

It literally looks like ‘No Water Month’ as 水無 means ‘No Water’, but it means ‘a month needing water’. A month you need to draw water into paddy fields just after the rainy season.

A month of the ear of rice bending downward for harvesting

There is another story that at 七夕Tanabata festival on July 7th people used to hang out books in the sun to dry. It is called Fumi Wo Hiraku (means open books), and has changed to FumiHirogeTsuki and became FumiZuki eventually.

A month all leaves start falling down

A month with long nights

The origin of the word is ‘a month of the Gods,’ but it is more common for now that no gods around as all deities in Japan go to Izumo 出雲 to meet up at Izumo Shirin 出雲大社 IzumoOoyashiro/IzumoTaisha, one of the oldest and most significant shrines in Japan.

A month of frost

A month teachers and priests run around busily

Even though these names are not used in our daily conversation, they are seen in books, poetry, traditional Japanese flower arrangement, Japanese calligraphy, formal letters and speeches and so on. These names are not only words but a kind of expression for Japanese people to feel seasons.