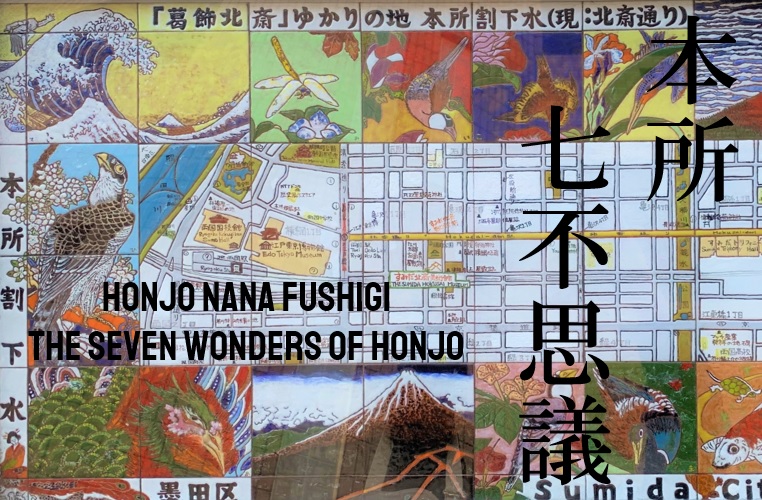 Like there are many ‘the seven wonders of --- ‘ in the world, Tokyo also has several mysterious stories. Today, we will introduce some famous ghost stories of the Shitamachi area called ‘the Seven Wonders of Honjo.’

First of all, let’s have a look at Honjo Area. In the Edo period (1603-1868), Honjo was developed as a new residential area along with Fukagawa. You might have heard the Japanese word of ‘Shitamachi 下町,’ which means the downtown areas with a unique and nostalgic atmosphere in the Eastern part of Tokyo, generally represents Asakusa 浅草, Shitaya 下谷, Honjo 本所, Fukagawa 深川.

The Seven Wonders of Honjo was set in the area between Ryogoku 両国 and Kinshicho 錦糸町 in Sumida Ward 墨田区. 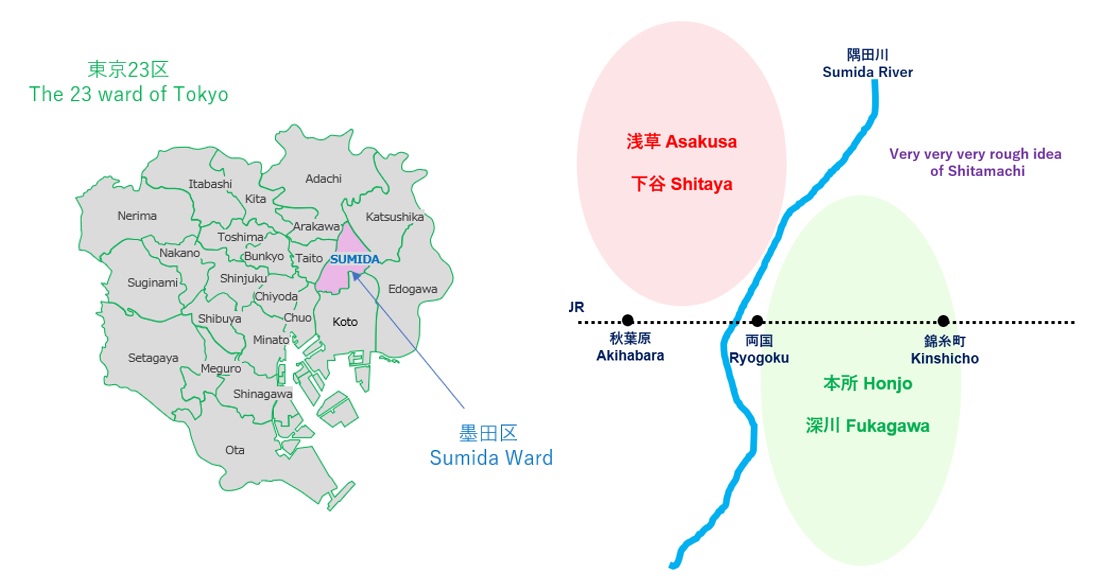 Now, let’s look at each story.

There used to be an old pond at the area presently called Kinshicho in Sumida ward. When people were about to go home after fishing, they heard a spooky voice whispering “Oiteke, Oiteke” (means “leave it behind and go away!”). Surprised and run away, they eventually found no fish left in the fish basket when arrived home. Some people believed the voice was Kappa making fun of fisher. Kappa is a human-like specter living in a pond, canals and river. It has Sara (a plate) on its head that needs to retain water, loves cucumbers and Sumo (sumo wrestling).

Walking on the alley in the night without a lantern, they saw a dim light in the distance. When they tried to come closer, it suddenly disappeared and shown up again even further away. They never could catch up with the light.

Night patrol went around the village hitting wooden clappers to warn people living in the area to watch out for fire. They heard the same clapping sound following, but no one was there behind when they looked back. 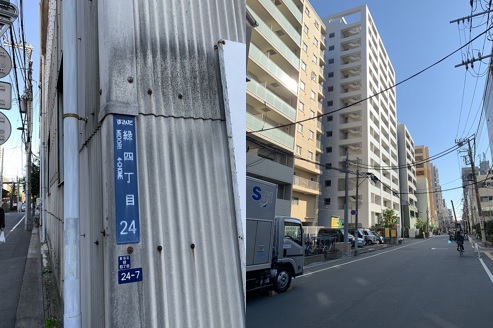 There used to be some Soba noodle stalls along a drainage channel called HonjoMinamiWarigesui (present Hokusai Avenue). One of the stalls, for some reason, always had light-off and nobody was working. It was said that in case someone turned on the light out of kindness, something terrible would occur to this person afterward. Even if someone only dropped by out of curiosity, the person would be cursed. Quite the opposite, we have another similar story called KiezunoAndon. It is a story about a spooky Soba noodle stand with never going-off light. If someone tried to put it out, the person would get misfortune. 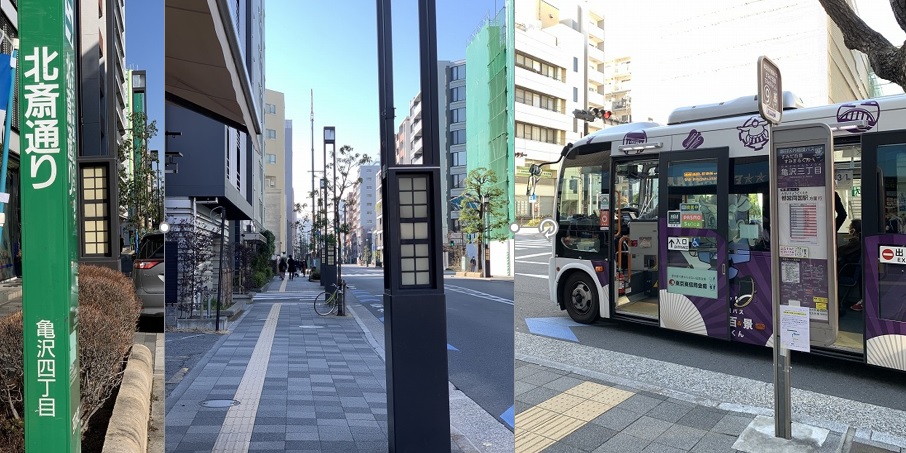 Every night at a manor of Hatamoto (an upper-class Samurai), a dirty hairy giant foot broke through the ceiling and appeared, shouting ‘Wash my foot, wash my foot.’ After being washed, the foot went back to the roof and disappeared. It repeated every night. Once they did not clean it, the foot got furious and rampaged around in the house. The Hatamoto did not know what to do and asked for help from his colleague. The colleague was very curious about the story and offered to swape manors with him. However, no such mysterious phenomenon occurred after the colleague moved in.

People heard the sound of the Taiko drums at night. They tried to find from where the sound came, but they could not find anything.

A Daimyo’s mansion (the house of Tsugaru) had a Taiko drum at the fire observation tower instead of Bangi (a piece of wood). When they found a fire, they boomed the Taiko drum to alarm it instead of striking the Bangi wooden piece. (This would be surely the least-scary story out of seven.)

A magnificent old chinkapin tree was planted in the garden of a Daimyo’s mansion (the house of Matsuura). The leaves grew thickly like forest and hung over the wall. Strangely no one saw any single piece of leaves dropped. They felt very creepy and said that the leaves of the tree haunted would never fell.

A beautiful girl was living in this area. One knavish living nearby fell in love with her and turned into a stalker, but she ignored and turned away. He got angry and waited in ambush for her at Komadome bridge and killed her. He pruned off her one leg and one arm, then thrown her into the river. Since then, the reeds had grown at this riverside had the leaves with one side only.

It is possible to visit all nine places above in a day. For example, if you start the tour at 10:00, walking from Kinshicho to Ryogoku, you could finish the trip around 16:00. Here is our recommended route for your reference. 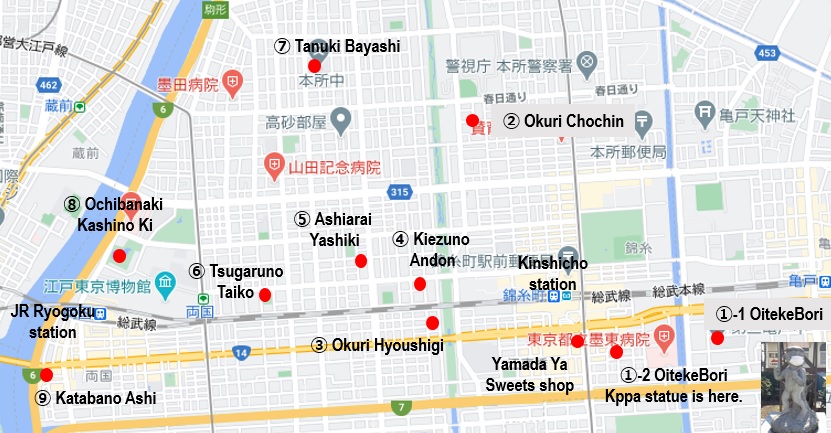 Lastly, let us introduce another fun spot for this wondering. YamadaYa 山田屋 is a well-known sweets shop selling tasty Japanese Ningyoyaki 人形焼き in 70 years. Their wrapping paper tells you more about the stories. The shop is just a few minutes’ walk from Kinshicho station.

If you have any questions about Honjo Nana Fushigi 本所七不思議, contact us at japantotheworld.com any time.